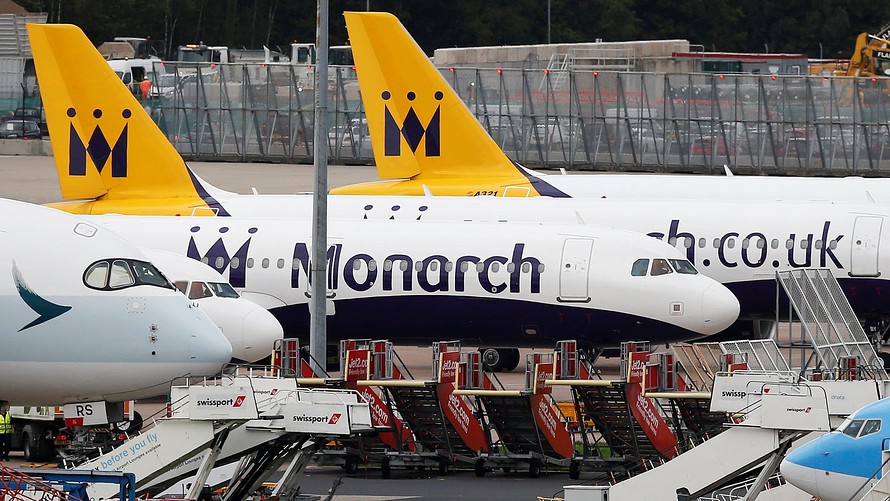 Monarch aircraft are seen parked after the airline ceased trading, at Manchester airport in Britain, on Monday.

British budget carrier Monarch Airlines has declared bankruptcy and halted operations, leaving up to 110,000 passengers stranded abroad after all flights and vacations were canceled.

What happened: The company entered administration on Monday, in what is being described as the U.K.’s biggest-ever airline collapse, after struggling to keep going amid a price war.

“Mounting cost pressures and increasingly competitive market conditions in the European short-haul market have contributed to the Monarch Group experiencing a sustained period of trading losses,” the carriers’ accountants KMPG said in a statement.

But the group’s engineering operation, Monarch Aircraft Engineering Ltd., is not in administration and will carry on trading normally, they said.

Help for customers: The U.K.’s Civil Aviation Authority has launched a program to bring stranded travelers home on new flights. This covers those overseas now and due to fly back before Oct. 15, an estimated 110,000 people.

“This is the biggest U.K. airline ever to cease trading, so the government has asked the CAA to support Monarch customers currently abroad to get back to the U.K. at the end of their holiday at no extra cost to them,” said Andrew Haines, the chief executive of the CAA, according to a report in the Guardian.

“We are putting together, at very short notice and for a period of two weeks, what is effectively one of the U.K.’s largest airlines to manage this task,” he said.

But those yet to take a trip have been told not to go to the airport, as all 300,000 future bookings have been canceled. Those who bought before Dec. 14, 2016 can make a claim for compensation under the ATOL industry financial protection scheme for consumers in the U.K. People who booked after that cannot lodge a claim.

This is the biggest ever UK airline failure. The CAA and Government are working together to support #Monarch customers. pic.twitter.com/YsXrGdj5FB

Germany’s second-biggest carrier Air Berlin AB1, -11.28%  filed for insolvency in August, and Alitalia’s assets are under the hammer after the Italian flagship went insolvent, too. In September, Ryanair canceled 18,000 flights as it suspended 34 routes until March, blaming a problem with pilots’ vacation scheduling.

Monarch was on track to lose 60 million pounds ($80 million) this year and above £100 million next year, the company’s CEO Andrew Swaffield said, according to The Wall Street Journal. Some costs rose due to the slump in sterling after the Brexit vote last year. A search for a buyer for Monarch failed, Swaffield said.

What analysts are saying: “Listed airlines like EasyJet and IAG may pick up the spoils of the extra bookings, but investor confidence in the sector will take another hit so soon after the Ryanair over-bookings debacle,” said Jasper Lawler, head of research at LCG.

“The third airline failure this year in Europe, after Alitalia and Air Berlin, is a symptom of overcapacity and overly-aggressive pricing,” said Neil Wilson, senior market analyst at ETX Capital.

By the numbers: Monarch, headquartered in Luton, employed 2,100 in its companies providing flights and packaged vacations. It had a capacity of more than 6 million seats a year and tour operator passenger volumes of more than 200,000 a year, according to the airline.

Established in 1968, Monarch flew out of five airports in the U.K. to more than 40 destinations.

Market response: Shares of rival low-cost carrier EasyJet rose 4.8% in London after the Monarch announcement, while IAG SA IAG, +2.36%  climbed 1.9%. Other travel and leisure stocks were higher, partly on the prospect they may buy some of Monarch’s assets at a discount. Travel operator Thomas Cook PLC TCG, +1.16%  was up 1.9%, for instance.